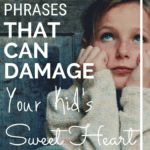 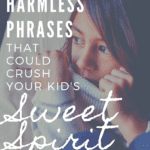 The way we talk to our children becomes their inner voice.

My three young children had a serious intervention with me.

I was completely taken off guard, which I imagine anyone is when they are on the receiving end of an intervention.

They approached me gently and asked that I sit down to talk. It was a very simple conversation. I had no other option but to sit and look at their little faces and listen to their tiny soft words.

They explained to me that I seem like I am too busy and that I am never actually paying attention. My son told me that recently he asked me, as a test, if he could “buy a unicorn and fly to Hogwarts”, and I told him, “Uh-huh, sure honey.” Although the conversation was simple, the truth in their words was sharp.

Even when I was trying to spend quality time with my kids, my mind was elsewhere. I was thinking about what to make for dinner, what I was going to do when they went to sleep at night, and what my schedule looked like the following day.

I made the realization that I was not happy with how I was parenting. Once I noticed how much they observed what I am saying, I realized that, honestly, I was saying some terrible things to them.

5 Things to Never Say to Your Kids

Previously, I thought these specific comments were harmless. I am only trying to be a good mother. I try to keep our lives organized, our house clean, and everyone in order; however, while I was caught up in all of this I was saying things that were detrimental to our relationship. I decided that the best way to start my recovery out of this “Busy Mom Syndrome” was to abolish these useless and toxic phrases from my vocabulary.

We are a busy family, and my children naturally like to take their time. “Hurry up” seems like a simple, harmless phrase. It is not so benign when you say it constantly. I realized I was telling my children in an annoyed tone to “hurry up” ALL DAY LONG.

I noticed that this was negatively effecting my kids in two ways. First, I was making them nervous. Imagine if you were trying to complete a task and someone was standing behind you tapping their feet with their arms crossed.

Secondly, I was crushing the essence of childhood that I loved so much- their curiosity. Maybe it didn’t seem important to me that my son had to build a house out of blocks for his super heros when we were 5 minutes late, but it WAS important to him.

Of course you have places to go and times to be there. The important thing is to remember that they are children, and it is a fact that making the situation stressful will only slow them down.

Instead of saying “hurry up”, try”

Has the phrase “calm down” ever worked on a child in the history of civilization? Not mine, that’s for sure.

My oldest son is full of mental and physical energy. He has an intense love for life, and yet I was finding that his energy-level was feeling more like an annoyance to me. He acts like our house is a 24-7 royal wrestling rumble, and I am convinced he thinks that if he doesn’t yell no one can hear him.

Yelling at him to “calm down”, was frustrating for both of us and not the least bit effective. I had to change it up a bit. I started to suggest other activities, encourage him to run around outside, or try relaxation methods. My goal was to understand that his unlimited energy was a positive thing, it just needed redirected, not suppressed.

Instead of saying “calm down”, try”

In fact, try these mindfulness activities for children.

The phrase “one more minute” had become my crutch. I felt like it was the away message to my brain. It automatically would roll off my tongue the moment any of my kids asked me for something, before I even processed what they were saying.

I don’t blame myself. The demands of three verbal children seemed never-ending, and this was my way of coping. Unfortunately, I realized that I used it too frequently, and with no intention to really meet their requests. I would move on to the next bullet on my mental “to-do” list until they asked again.

My new goal is to be an accessible mom. One that has time for my children and puts them first. We don’t have to drop what we are doing instantly, but we can show them that we are actively listening and truly care.

Instead of “one more minute”, try:

One morning recently, I can only assume that my children ate 30 pixie sticks and washed them down with a case of Red Bull. It was one of those mornings where I felt like I was a referee for a wrestling match, a warden for a state prison, and a lawyer all in one.

For better communication: Teach your kids about these 5 forbidden phrases.

When my husband called to chat, I mentioned to him that my children were “making me go crazy and making my anxiety rise.” I was only venting and didn’t think anyone was listening.

Of course, my 7 year old son heard and later approached me about it. Although, I thought it was an innocent, and well-deserved comment, it had upset my son.

He was both worried about my well-being and hurt that I felt that way. I explained to him that I was just overwhelmed, but that I shouldn’t have said those things.

When I feel overwhelmed, instead of taking it out on my kids for being kids, I find a way to take a quick mental break to refresh. Then, I make an attempt to redirect their energy. Although I try to avoid relying technology, I have learned that in desperate circumstances, a little television can help provide a quick break and let us all reset.

Instead of saying “you’re making me go crazy” try:

Or, try going in the other room and calming down alone with these Mindfulness Activities for Moms.

I was lucky that my son was observant and mature enough to notice this behavior and call me out on it. A younger child may have just went on, feeling less valued and unimportant.

From my point of view, I would be in the middle of a task and my son would pull me out of my trance by saying something like “Really mom, it’s Friday and we can have a pool party!?” I’d reply, “What? No, it’s Monday…”. Then he would explain that he just asked me the question and I replied with “Uh-huh, sure honey.”

My mind was in so many places except for where it needed to be- in the room with my child. It happened so often, that I realized I even did this when my husband would talk to me.

Until I can break this bad habit, if I hear someone talking to me, I have to stop and listen like my life depends on it. If I am busy, I will acknowledge that they are speaking and ask them to hold their thought. It seems like it is common sense, but when you are mentally juggling the world all at once, it can be a challenge.

Instead of giving a distracted nod and saying “uh-huh”, try:

It is easy to become so lost in your schedules and responsibilities that you don’t realize the impact your reactions have on your children. We can’t always drop what we are doing to play with our children, but we must find ways to show that we value them.

Related: 5 Simple Ways to Hardwire Your Kid’s Brain for Happiness.

These seemingly harmless phrases can have a potent aftermath on your child’s impressionable mind and self-confidence.

Also, if you pay more attention then you don’t have to worry about your child buying a unicorn and flying to Hogwarts upon your unconscious approval.

If you found this helpful, print the above reminder and share it!

When my parents said to hold that thought, that’s when I was defeated and gave up.

Very helpful. Thanks for posting. I think we can say these to our husbands too, not justour kids. It will make the marriage beautiful.

Thank you so much. This was insightful and validating.

I also have 3 kids 2 3 and 5 yrs old and as much as I read posts like this and mom blogs qnd try to be as present for my kids as possible I to find myself saying things I shouldn't to them. 3ven having them hear a conversation I'm having with someone else my oldest always has an ear to my conversations and thus article really is so clear qnd thought thru. We're so numb to our behaviors at times. We don't want to change our natural personalities and have our kids not know our true self but being mindful of simply how we fraise something makes such a difference in their little minds!

Parents of Positive Kids do These 5 Things -