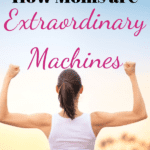 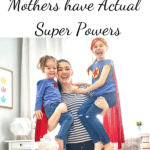 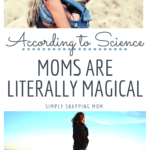 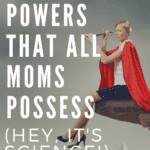 Despite the chaos of life, the juggling of schedules, and the gentle balancing act of baseball practices, dinner preparations, and laundry loads, most mothers remain a solid rock for their families.

Many mothers go about their days, soaked in mom-guilt and battling self-doubting thoughts, often with the goal of just trying to get by. All the while, not even realizing the phenomenal things that are actually taking place right in front of their eyes.

If you take a step back, you will start to see that your role as a mother goes far beyond being chauffeurs, short-order cooks, and homework-helpers. Despite functioning off of a lack of sleep and being full of unconditional love, there is still more than meets the eye.

Mother are actually extraordinary machines, capable of astonishing tasks and full of practically mystical abilities that many are not even be aware of.

If you don’t believe me, just ask science.

1) Mom’s Intuition is the Real Deal

You stop dead in your tracks.

You are not sure why, but something just doesn’t feel right. Your heart rate picks up, and your palms sweat. You bolt into the kitchen, just in time to catch your 3 year old (who pushed a chair to the counter to look for candy) as they attempt a swan dive dismount off the counter.

You brush it off and go about your day; relieved that you made it in time to catch him or her. You don’t even think twice about how you just knew in your gut that something wasn’t right.

If you are a mother, then you most likely have experienced this type of gut feeling, or “mother’s intuition”. You may brush it off as a lucky coincidence, but science shows that mother’s intuition is a real thing.

Dr. Victor Shamas, a psychologist at the University of Arizona, explains intution as “knowing something without knowing how you know.” Several years ago, Shamas conducted a study of over 100 pregnant women during their first trimester – to find out how many could correctly identify the gender of their baby based solely on instinct. Suprisingly, 70 percent predicted the sex of their unborn child correctly, which they described as knowing through a “gut feeling”.

Another study found traces of male DNA (Y chromosomes) in the brain of mother’s who delivered sons, suggesting that women carry the DNA of their children inside their own brain. Possibly, this could be the science behind mother’s intuition; we literally carry traces of our children in our own bodies.

Although it isn’t fully understood, it is a reminder to always trust your “gut feeling”. There is a good chance it is right.

I recall a time when I was breastfeeding a baby, while sweeping the floor, while on the phone with a friend, while spaghetti was boiling on our stove.

Moms seem to have this innate ability to multitask with ease, and magically do the job of 5 humans all at once. And, if we had more arms, we could probably complete even more tasks at the same time.

Research shows that women are less affected by interference when carrying out certain tasks than men. Experiments published in the Royal Society Open Science journal, demonstrated that the walking pattern of men – who have low levels of oestrogen (a female hormone similar to estrogen) – changed when they had to perform a difficult verbal task at the same time. This was not the case for pre-menopausal women.

Next time you find yourself successfully juggling the work of 10 humans, you can thank your magnificent female brain for that.

When I was sick as a kid, if my mom rubbed my back I would instantly feel better. Honestly, I thought that my mom’s touch had some supernatural powers. Turns out, there is some truth to that.

Many studies point to the benefits of a mother’s soothing touch. One such study done by the The University of British Columbia and British Columbia’s Children’s Hospital Research Institute found that a baby’s DNA can actually change depending on the frequency of physical contact with his or her mother. Even more specifically, they found that babies who have low physical contact from their moms end up having cells that do not mature as expected for their age. This can lead to delays in a child’s growth and development.

Never underestimate the power that your touch has on your children. It can have remarkable effects.

4) Our Brains are Capable of Major Changes

You may recall experiencing “mom brain” during or after pregnancy. Many describe it as a feeling of fog and difficulty with short-term memory. It’s thought of as a negative effect of pregnancy; however, it is actually an amazing phenomenon.

Some scientists believe that this fog, or change in the brain, may have evolutionary benefits, which include strengthening the communication between a mother and her infant. It appears that the brain of a mother has the ability to enhance its empathetic capacities, in turn, strengthening a mother’s ability to pick up on a baby’s nonverbal communications through facial expressions and cries.

In other words, think of “mom brain” as a phenomenal shift of mental priorities, not as a unfortunate fog.

Whether you chose to breastfeed your babies or not (which is fine either way), the fact remains that a woman’s body is capable of fully raising her baby from milk produced by her own body. That is ridiculously amazing.

The many capabilities of breast milk never fail to amaze. In addition to the positive effects that breastfeeding has on the mother, the babies immunity, and bonding experiences, studies continue to show some pretty phenomenal benefits. One such study demonstrated that premature babies who were fed more breast milk in the first 28 days of life have better brain development by the time their original due date arrives. Benefits to IQ and memory skills were even seen later in childhood.

Not only do mothers have the power to instinctively feed their babies, the product they are producing is capable of lasting outcomes.

You may not have a gourmet meal on the table or a sparkling, clean oven, but that is not what defines you as a mother. Remind yourself of the extraordinary feats you are capable of and hold your head high. I mean, you grew and carried a human inside of you. You are nothing short of a phenomenal machine.

If you found this helpful share it! And check out some other posts on Mom life!

[…] Studies continually show how trustworthy your instincts as a mother are. When you learn to listen to your gut feelings, you will realize how reliable they can be. […]

It is pretty crazy the things moms can do! I always thought it was crazy that when my kids were younger and frequently got out of bed at night, I would somehow wake up from a dead sleep and sit upright ready to tend to their needs even before they made it to their bedroom door to open the door.

As a preschool teacher, I have experience this intuition and multitasking a lot, especially when each kid have different needs at the same time.

I absolutely loved reading this blog! Really informative and reminds me how incredible us women really are! Thank you!