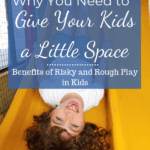 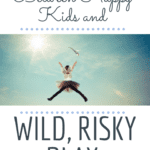 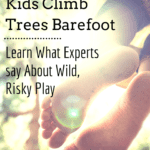 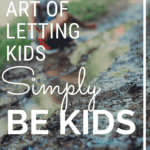 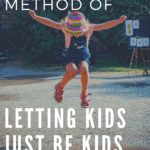 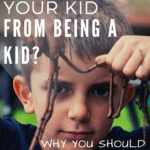 “Your children!” yelled the winded woman at the park with the wild expression who was running my way. “They are attacking each other!”

I slowly leaned back so I could see them in view. My 8 year old son and his 6 year older sister were scrapping on the playground cement. He had her in a solid headlock, and she had a handful of his hair. I did a quick scan for tears or blood, and I saw neither.

“Thanks. They’re fine,” I told her flatly as she gave me a disgusted look and walked away.

Soon after, my two children released their talons from each other and walked away to play another game together. Unless someone is hurt, I have always felt that their instinctive need to wrestle was not something I should stand in the way of. In fact, they just reminded me of little puppies rolling around and nipping at each other’s ears. I always encourage them to climb trees, run around barefoot, and ride their bikes off of jumps.

However, today’s society seems to be more concerned with how messy our kids get, how much free time we have as parents, and how other’s will perceive the wild behavior.

Deep down, although I feel that children do benefit from some boundaries, I’ve always had an inherent feeling that rough and risky play was important for the development of children.

Still, the woman’s judgmental expression prompted me to do a little research to truly see if letting my children act like caged monkeys who just escaped the zoo was appropriate.

Without hesitation, I went to the one place I trust, The American Academy of Pediatrics (AAP), for answers. It didn’t take long before I found what the professionals say about “risky play”.

What is Risky Play?

There are six categories of risky play, according to an article published in Evolutionary Psychology, which include experimenting with:

Children are notoriously drawn to risky activities. As parents, it is our job to determine what is appropriate risky behavior (such as climbing a tree) vs. what is harmful (such as playing with knives).

Benefits of Rough and Risky Play

It turns out, the secret to raising happy kids is not so secret. It is to simply let them be kids. It is no secret that kids naturally enjoy rough play. As parents, should we be stepping in to prevent this type of behavior, or should we encourage it?

The Power of Play discusses the many benefits of unstructured play, but I was specifically curious about what is said on rough and risky play.

The experts at the AAP explain, “Play is not just about having fun but about taking risks, experimenting, and testing boundaries.” They explain that studies suggest that risky play provides animals and humans with skills that will help them with survival. Of course most of us are not concerned with teaching our children how to escape from predatory lion chasing them down; however, rough and risky play has many other benefits.

Similar to animals, rough-and-tumble play enables children to take risks in a relatively safe environment. This helps children learn skills needed for communication, cooperation, and it promotes the development of emotional intelligence.

Recently, my 3 year old son decided to climb UP the slide at the park. He was quickly bowled over by another kid who was riding the slide properly. I watched this go down, and I did not intervene. My son got up, shook it off, and started to climb the ladder to do it the right way.

He had learned a simple life lesson that if you don’t follow the rules, you might get hurt. He was actually learning important skills while he was getting kicked in the chest.

According to The Power of Play, guided competition in the form of sports or rough play allows all participants to occasionally win and learn how to lose with grace.

The children in our neighborhood often meet up for a game of tackle football. There is a lot of ‘tackle’ and not so much ‘football’; however, there is a lot of learning taking place.

The kids learn emotional lessons, such as dealing with a loss and interacting with peers. Even though there is an occasional bloody lip, the boys are developing an immense amount of social skills about how to interact with other people when things don’t go your way.

Recently, two of my children were playing something that resembled a dangerous version of “ring around the rosie”. They would hold hands and try to swing each other around as fast as they could – until one child let go and flew backwards.

As expected, my daughter let go of my son’s hands and he practically did a flying back-flip into our couch. Before I could run over to comfort him, my 6 year old daughter sprinted to his side. She hugged him, helped him up, and they found a new game. It was a very simple act, but she was learning the negative feelings that were associated with inflicting harm on someone else. Through that silly and dangerous game she was practicing empathy.

In fact, Britain has even gone as far as modifying its guidelines on play, highlighting that “the goal is not to eliminate risk.” The impact of this type of play is clearly noticed and backed up.

As parents, it can sometimes seem like a challenge to provide our children with a balance between risky play while still ensuring their safety. Tap into your intuition in all situations. Remind yourself of the benefits of rough play. Kids are resilient little creatures. If you are unsure, ask yourself:

For example, if my child wants to run around at the park with no shoes on, the worst (realistic) thing that could happen is they get a splinter. If they want to play with knives, that is a different story, of course! (high danger, high risk).

If you don’t feel comfortable, start slow. Let them ride their bike down a hill with your supervision. Allow them to roll around in mud or climb a tree. Or simply stop yourself from immediately running to their rescue when they are trying to perform a slightly risky activity or struggling to complete a task on their own.

Give them some space to simply be a kid.

You can still supervise them from a distance, and let them explore the world. Often my kids don’t even realize that I am watching them like a hawk from our porch.

While your children are learning these important lessons, they are building priceless memories of childhood that they will not soon forget.

Next time someone judges you for having wild children, just inform them that your kids are only building emotional intelligence, practicing empathy, learning interaction skills, and building confidence.

I loved your Article. It's a true reflection of what kids should be doing

[…] You may also like: This importance of letting kids be kids […]

Risky plays are very important for kids as they know their strength and weakness and sometime despite being tired they push themselves to do better.