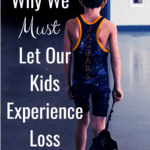 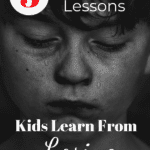 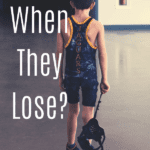 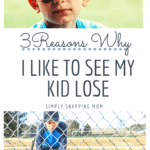 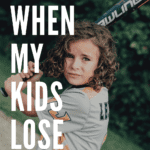 I have a confession: I like to see my kids lose.

However, as a parent, I have learned to look at the bigger picture. Whether it is at the school spellingbee, during a family boardgame, or in any sport – every single time my child loses, they are learning three of the most important life lessons they can at this young age all tied up into one. There is no other way to learn these principles than by actually experiencing a loss.

1) No Matter How Hard You Try, You Don’t Win Every Time

My oldest son plays several sports, but his passion is wrestling. He works hard at practice several days a week and during a wrestling tournament he honestly puts it all on the mat. He is only 7 years old, but his passion, focus, and dedication absolutely amaze me.

Still, there are always going to be kids who practice harder, played longer, or are just naturally more athletic. Even when he tries his hardest, he sometimes loses his match. When the referee lifts his opponents hand in the air, signifying their win, my son looks defeated.  Sometimes, he looks crushed as he is fighting back tears. Just when I think he is going to yell “I  quit”, I witness something else take place.  He simply shakes it off and moves onto his next match-up.

Recently, he told me after losing a wrestling tournament “it’s best that I didn’t win, because the drive home was bumpy and my trophy would have broken anyway.” It was cute and silly, but it was his way of coping through his loss and learning that winning was not guaranteed.

There will always be times in their lives when they won’t win. They may not get an A+ on their math test.  They may not get the job they interview for. They may start a business that fails. They may not get chosen to be PTA president. Learning as a child that you don’t win 100% of the time will produce resilient, and confident adults.

2) Though Difficult, Lose Elegantly and Congratulate the Winner

At a recent wrestling tournament, my son was proud to tell me that after he won he ran up to tell his opponent who lost “Good job”. Don’t get me wrong, I was proud of his good sportsmanship, but I saw this as a learning opportunity.

It is always easy to tell your opponent good job when you are the winner. The difficult part is keeping that same attitude when you lose. I saw several times when my son lost a match and he cried and hid his face when his winning opponent congratulated him.

Once learned, losing elegantly is a life skill that will remain with them forever. Even many adults can be sore losers. It is our nature as humans to be jealous or upset when we do not succeed. When kids learn to overcome that anger and lose with dignity, it will spill over into all aspects of life and teach them to be better humans.

Last year, I saw my son congratulate someone who beat him for first place. It was a battle for a wrestling belt (like the one on WWE), which he REALLY wanted to win. He won 5 matches to get to the final match- 2 of which were against his ‘arch-nemesis’s’ that had beat him before. Needless to say, the championship match did not end in our favor. However, I saw in his face that the moment he congratulated his opponent, he finally understood what I meant.

We celebrated his second place medal extra hard that day -even more than if he won that first place belt- because of how he acted.

3) Practice harder if you really want something

My husband always tells my son:

You earn trophies at practice, and only collect them at matches/games

Although we giggle at the cheesiness of the comment, we all know deep down how true it is. At the first practice after a loss, you can see the fierceness in my son’s face. He knows that if he really wants something, he has to work for it.

Nothing good comes without hard-work. Losing gives children something to work for. It pushes them to practice, try hard, and then see the fruits of their labor when they do succeed.

This year, we went to that same wrestling tournament for the belt. He learned last year that if he really wanted to win, he had to work for it.

Guess what? He got to learn first hand that with hard work, he can achieve anything when they handed him his well-earned belt.

As a parent, I think it is important to sacrifice a few plastic trophies to lose and learn these life principles first hand. You can talk about sportsmanship until your face turns blue, but until they experience a loss, it will not mean anything.

No parent wants to see their child disappointed, upset, or hurt; however, if they learn how to lose elegantly as a child, they will be more resilient and confident adults. Getting a trophy or winning each time will not teach these important life lessons.

Plus- when they do win you get to see them experience pure joy and appreciation, and who doesn’t love that!

Do you agree with the importance of teaching your kids not to be sore losers the hard way?

We love these decals!

[…] may sound harsh, but I actually love to see my kids lose. It teaches them that they will not always win in life, and the importance of hard […]