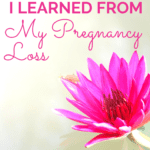 I am not trying to put a positive spin on my miscarriage. I wouldn’t call anything about that experience “positive”. However, if I reflect on the pregnancy loss that I had a few years ago, I can’t help but notice the ways it has changed me.

It was an unexpected pregnancy. I had an almost-3-year-old boy and a one year old girl. I was one of those static cases who got pregnant on the Mini-pill, and I found myself blankly staring at a positive pregnancy test. Ironically, just when I was starting to accept the pregnancy and get excited for the new baby (around nine weeks), I had spotting and a feeling that something wasn’t right. An emotional ultrasound confirmed what I already knew, I was having a miscarriage.

To say it was a difficult time for me would be an understatement; however, with all painful experiences, there is some level of personal growth. I believe you can learn a lot about yourself and the people around you during difficult times. These are the five things I learned from my miscarriage.

The Feeling of Unconditional Love

As a wife and mother of two kids at the time, of course I had experienced unconditional love. I grew up with 4 sisters and two loving parents, so I always felt loved.

However, when I had experienced that rock-bottom feeling from my pregnancy loss, I had a new understanding for unconditional love. During my miscarriage, I had a day where I sat in the bathroom for a straight 6 hours. I really feel that my daughter, though only a small child, sensed that I needed her. She literally sat in the bathroom with me for hours upon hours. She talked me to, brought in her toys, and simply kept me company during that dark day. A small kid, sat in a small quiet room for hours with no complaints.

She won’t remember that day, but being on the receiving end of that kind of love and family support is something I will never forget.

Understand What Real Pain Was

I was fortunate to have never experienced true heartbreak before this time in my life. I may have felt that something like losing a 7th grade “boyfriend” was painful, but it was nothing.

Suddenly, the stupid things that I got so angry about before, such as being stuck in traffic, became much easier to cope with.

My Own Ability to Cope

When I got home from the ultrasound, my coping skills were non-existent. I remember sitting in the bathtub until the water got ice cold. I couldn’t move. I didn’t know where to go or what to think.

However, the following day I got out of bed. And the following week, I let myself start to talk about it. I, in fact, did have the ability to cope with a terrible loss and move on.

How to Relate to Others on a New Level

If I am being truly honest, prior to my pregnancy loss, if someone told me that they had a miscarriage I would have felt bad, but said something like, “At least you can try again.” Ugh, after going through it I wish I could slap myself.

My loss was a very confusing time for me. I wanted to talk to everyone about it, but I also didn’t want to tell anyone. Once I opened up, I started to make important connections.

An old friend, who was brave enough to share her pregnancy loss story, reached out and supported me through mine. Having an understanding shoulder to cry on was so impactful to me, that I try to share my story in case anyone else could use that level of support. I was able to pay it forward several times.

Also, at the time, another friend of mine was going through infertility, and although it is a different scenario, I could relate to her pain and support her in the way she needed.

An Even Greater Appreciation for Life

My first two pregnancies were extremely smooth. That positive symbol appeared on the pregnancy test, my husband and I told everyone we knew, and months later we were blessed with a sweet baby.

After my loss, I realized how delicate life was. I had an even greater appreciation for the life of my current children, my nieces and nephews, and any future children I may have.

A year after the loss, we made the decision that our family wasn’t complete, and we anxiously tried again. That pregnancy was filled with fear of a repeat occurrence. I had doubts until the minute my son he was placed in my arms.

I am notably thankful, on a daily basis, that my feisty little three year old “gift” is in our lives.

Reflecting on painful events is hard, but if you can find some “positives”, you can grow from the experience.

If you found this helpful, share it! And check out some other recent posts on Mom Life:

Renee Theresa I think it’s beautiful that you are using your loss in a way to help others. I pray that it brings you healing as well as others ❤️

Some of my greatest blessings came because of or out of my darkest moments. It definitely changes your perspective on tough times moving forward as well. May not make the journey easier, but finding the "positives" is encouraging for not only your own healing process, but helpful for others as well. Thank you for sharing.

I'm so sorry for your loss, but it's empowering to see you take a difficult situation and turn it into a positive. I am praying for you and your family.

Thanks fpr sharing your story. I have experienced several miscarriages and they were so hard. You are a brave woman.

I can't imagine. I'm happy that you have found positive ways to deal with it. Such a beautiful post<3