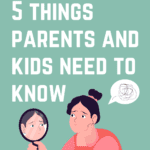 Learn OCD symptoms in 4 year old and older and our families own experience with obsessive compulsive disorder.

When the pediatrician told me that my daughter’s anxiety resembled obsessive compulsive disorder (OCD), I was both relieved and terrified.

Relieved because, well, now we knew what to call her “problems” and “weird feelings” (as she called them).

And terrified because these are the thoughts that instantly ran through my brain all at once:

“Am I the worst mom in the world? Did I cause this? Is she going to be one of those kids who wash their hands until they are raw red? Maybe, I shouldn’t have yelled at her when she wouldn’t stop crying last week. Am I equipped to handle this?”

Luckily, our pediatrician gave me some excellent resources, and I read a healthy stack of books. I am here to share what you need to know if you are a parent and you suspect your child has OCD-like symptoms.

Disclaimer: this is not to take the place of any professional medical advice. It is to share our family journey. If you think your child may have OCD, call your pediatrician. This was our personal experience on OCD symptoms in 4 year old kids.

OCD in 4 year old kids (or any age) can be scary for kids. This is our experience:

OCD Symptoms in my 4 Year Old

My 4 year old daughter was always a sensitive soul. She was the baby that would scream if someone held her other than myself.

Fast-forward a few years to 2021, when things fell apart.

If I am being honest, my daughter always had OCD-like symptoms. She was extremely particular about certain things like her socks and the color of her cup, but when I talked about it to other parents it seemed pretty common.

Then, when she was a 4 year old we noticed routines and tics, like clearing her throat 50 times a day or repeating a phrase over and over again, but these strange behaviors would wax and wane over the years.

Then, one day she came to me and begged me to fix her. At only 8 years old, my daughter was crying out for help. She was being tortured by her OCD symptoms, and I didn’t even realize it.

Her symptoms included things like the need to do things in even numbers, having to make sure any objects were ‘face-down’, and having to tell me every time she thought she did something wrong (which was usually silly, like forgetting to wave to someone).

When my daughter was explaining these things to the pediatrician during her annual check-up, it sounded like word vomit. A ton of random rituals and thoughts that I never even noticed – like chewing her food exactly 8 times. You could see the relief wash over her face – both when she was talking about her “weirdness” (which she called it) and when the doctor explained what it was.

You May Also Like: Parenting a Highly Sensitive Child

Obsessive-compulsive disorder (OCD) is exactly what it sounds like. Obsessions are unwanted thoughts and fears, and compulsions are rituals that the child feels forced to perform.

Essentially, your child will have obsessive thoughts (such as the constant fear of germs) that lead to compulsive behaviors (such as non-stop hand washing or other repetitive behaviors).

If your child has OCD, you may notice one or more of these 5 symptoms of OCD:

Typically, there is a genetic component involved. It is common for other family members to have anxiety disorders and mental health disorders. Also, pediatric OCD has been linked to environmental factors, such as strep infection (such as strep throat).

As parents, it is normal to feel overwhelmed and a little lost when our child is struggling. Instead of panicking, like I initially did, it is crucial that you and your child understand these 5 things about OCD.

OCD symptoms in 4 year old kids and older may look different. A child psychiatrist can play an important role in helping you identify other common compulsions and mental health issues associated with child-onset OCD.

Luckily, OCD is a very well-understood condition – even in young children. With proper treatment, it OCD can be managed and often cured.

These 5 facts will help you and your child grasp what they are feeling and experiencing.

Approximately 1 in 200 children and teens in the United States have OCD. That means that if your child is in a normal size school, there are most likely several other kids at their school with OCD.

Celebrities who have come spoken out about their OCD include David Beckham, Leonardo DiCaprio, Jessica Alba, and Charlize Theron).

This made my daughter feel much better. She excitedly said “I am going to start asking everyone at school if they have OCD!” While we told her that wasn’t necessary, it was clear she didn’t feel so embarrassed by it.

Related: Learn the difference between a temper tantrum and a meltdown

Children often grow to feel guilty about their OCD rituals. That is when it is important to compare these urges to hiccups.

In the groundbreaking book The Boy Who Couldn’t Stop Washing, by Judith Rapoport, the widely-used term – mental hiccup – was coined.

Think of OCD as a hiccup – a sporadic, and uncontrollable action. At first, the hiccup may not feel very bothersome, similar to my daughter clearing her throat years ago. However, like hiccups, these urges become painful, and they interfere with our ability to live our lives.

When we first started to work through getting rid of my daughter’s OCD, she asked “but isn’t that who I am?”

Intrusive thoughts and ritualistic behavior are just as much part of our personality as a case of athlete’s foot or the common cold is.

These are not normal childhood behaviors. It is a mental health condition and it is not your fault or your personality.

4) If Left Untreated it Can Get Worse

Sometimes, these routines and rituals will go away on their own. This is not always the case. In fact, according to the OCD Center, sometimes it takes up to 17 years for someone with OCD to get the correct diagnosis.

OCD is thought to be a progressive disorder, which means that when left untreated it can get worse. If you think your child has OCD tendencies, don’t wait it out. It is important to talk to your doctor right away.

Related: How Parents can Help Kids with Anxiety

Your child should be told that there is nothing wrong with them, just a small “switch” in their brain needs adjusted. OCD is like a broken stop light.

Typically our logical thoughts can tell our brains to turn on a red light when the “fight and flight” response is not needed. When kid’s have OCD, there is a little tweak in this process. The “red light” that tells the brain to relax does not turn on. Instead the “green light” remains on, and the anxiety runs rampid.

So, how do we teach our kids how to turn on the “red light” in their mind?

Download and print this to get the conversation started:

Getting Rid of OCD

While OCD may never “go away” for some, it an be managed with professional help.

After the diagnosis of OCD, there are many treatment options for young people.

With the help of our pediatrician team, child psychologist, and the 8 step program in the book “Talking Back to OCD“, by John S. March, we were finally able to understand and remedy this mental hiccup that caused us so much stress over the years.

If your child is showing signs of OCD, such as recurrent thoughts or spending a lot of time doing certain daily activities (such as a bedtime ritual), talk to your doctor or a mental health professional about effective ways to help.

Once we started doing ‘exposure therapy’, my daughter slowly started to learn new ways to understand and cope with her “weird feelings”. She learned how to say “NO” to the obsessive behavior and get control of her life.

Did this help you understand OCD symptoms in 4 year old kids (and any age for that matter!)?

[…] Related: How to Help a Child with Obsessive-Compulsive Disorder […]

[…] general, OCD is diagnosed when these obsessions and compulsions become so time-consuming that they negatively interfere with the […]

[…] general, OCD is diagnosed when these obsessions and compulsions become so time-consuming that they negatively interfere with the […]

Great post and I agree it's important to be observant and face mental problems in the early stage, it won't help avoiding them. - Knycx Journeying

That's a very helpful and informative post on ocd in kids.